“I find that Canada’s very receptive to being creative. You can do what you want creatively, and it will be somehow appreciated by someone.” 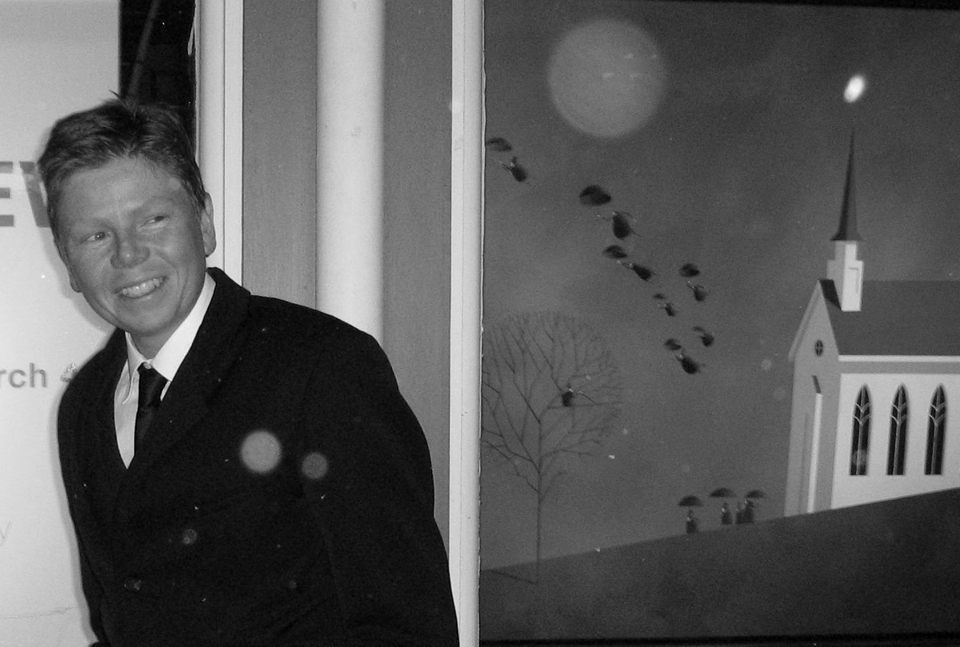 I’d been looking for reasons to chat with Andrew King since I first saw his work in 2006. It was at Art in the Park (now the New Art festival), an annual outdoor exhibition in Ottawa, Ontario that features the work of local artisans. Andrew’s acrylic paintings, with their unconventional shapes and unique angles, their bold lines and colours, immediately grabbed my attention. I went over to his tent and struck up a conversation, only to discover many neat little tidbits about him, like his animation background, sense of humour, and genuine enthusiasm for people and art.

Over the past five years, we’ve briefly crossed paths at a handful of other exhibits, but we never spoke long enough for me to really get inside his head and learn about the experiences and process that led to such brilliant works of art. Needless to say, I was excited for the opportunity to sit down with him and get a closer look behind the curtain.

As it turns out, a number of factors contributed to the wonder that is Andrew’s art.

Andrew developed his craft near Bath, Ontario, drawing on the backs of DuPont documents. Every day after work, his father David, who was a draftsman at the chemical company, handed his son the stacks of used paper his colleagues had tossed in the garbage. “This was before recycling,” says Andrew. In addition to being a draftsman, David was a gifted cartoonist, and his son soon took after him, sketching comic strips until his fingers cramped.

When Andrew’s parents went out on Saturday nights, he and his younger brother Evan stayed in with a babysitter and watched PBS’ Masterpiece Mystery! “I loved that show,” says Andrew. “I’d be in my pajamas, with salt & vinegar chips, watching Mystery! In the opening credits, they had those little guys in the black and white cartoon, and it always stuck in my head.” His interpretation of those little black guys has been a recurring theme in many of his paintings. 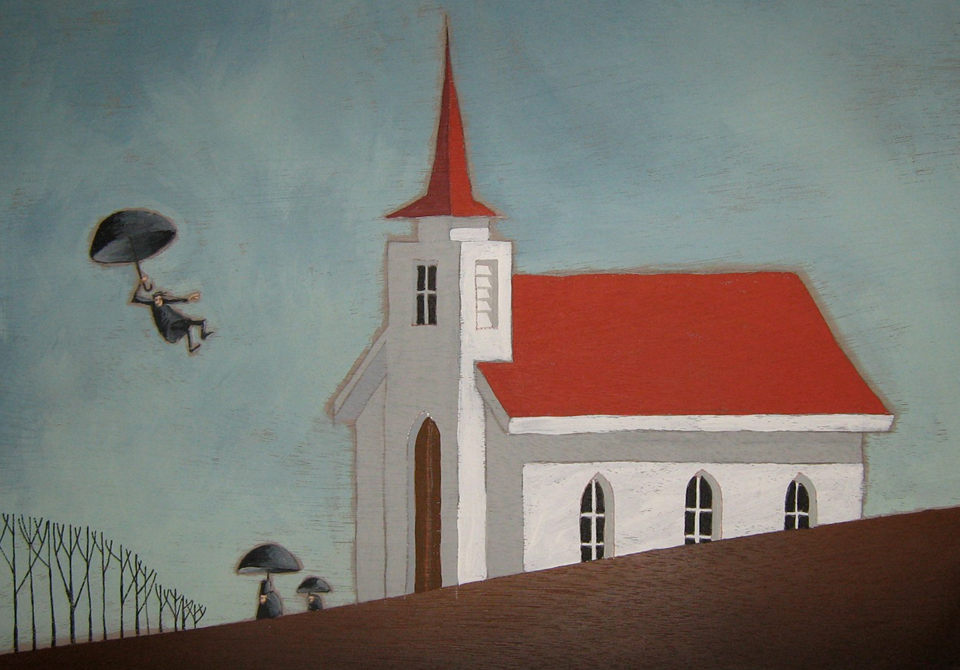 On top of being an artist and draftsman, Andrew’s father was a pilot with a keen knack for technology and engineering. He built his own plane, and often took his son out flying. Those early experiences instilled in Andrew a love of all things “nerdy and aeronautic,” and, really, anything that moved. “I love the technical aspect of it, I love the design of it, I love the form that follows function,” he says.

That passion extended to vespas, cars, boats and spaceships.

If there was one thing Andrew loved more than salt & vinegar chips and planes, it was Star Wars. After watching the original Star Wars trilogy, he poured over Timothy Zahn’s Thrawn Trilogy, a set of books inspired by the films. Andrew decided that the books would make great fodder for future Stars Wars movies, and that he should be the one to design the spaceships. “I thought, ‘I’m going to design everything that’s mentioned in these books in case they make the movies, and send it off to Lucasfilm,’” he says.

That’s exactly what he did. Every year, he sent his latest designs to the production company. And every time, he’d receive a polite rejection letter. Until 1998, that is, when he was working in Vancouver and got an invitation to visit Skywalker Ranch and share lunch with George Lucas. “It was mind blowing,” says Andrew. “It was my dream come true.” The meeting led to a job interview, but Andrew didn’t enjoy storyboarding enough to pursue a career in film. And I digress.

Flash back to Ontario in 1991. Andrew was about to graduate from Ernestown Secondary School. The time had come to decide what to do “when he grew up.” As he saw it, the options were: draw a comic strip, design cars or design spaceships.

Ever inspired by Star Wars, he looked into industrial design at the Art Center College of Design, where Star Wars spaceship designers Joe Johnston and Nilo Rodis Jamero had studied. But the tuition was prohibitively expensive, so Andrew looked into industrial design programs in Canada and enrolled at Carleton University. “They trained you… to take the ideas in your head, visualize them and translate that into a concept,” he says.

After three years, he realized that he’d be designing more filing cabinets and power tools than cars and spaceships. So he pulled out of the program and began pursing his other passion—comic strips. 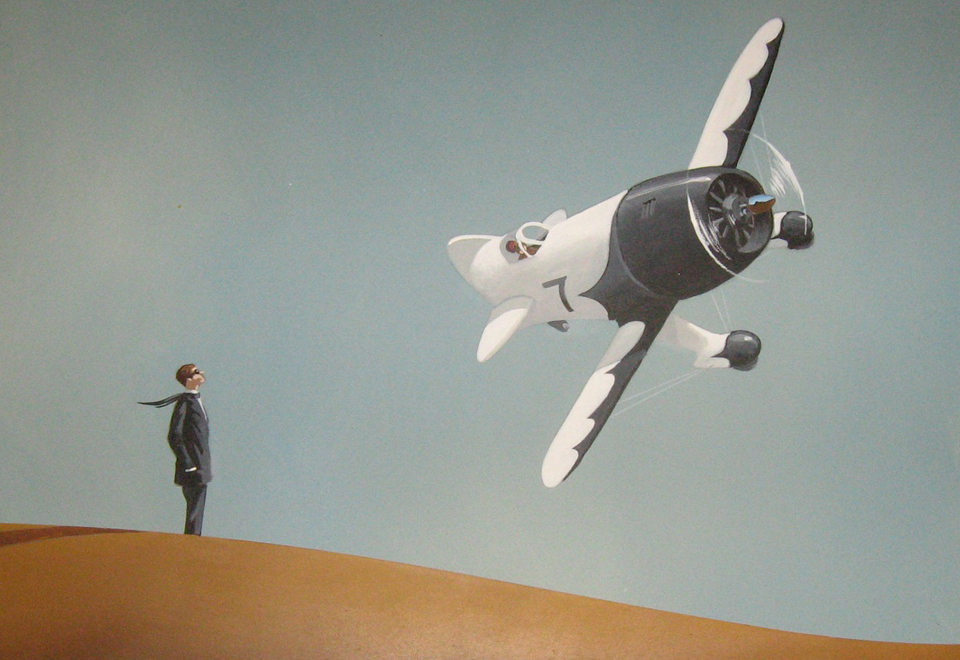 Once Andrew combined drawing with writing and creating a story, he was utterly in his element. In no time, his strip Off the Wall was picked up by the Ottawa Citizen and ran every Sunday. “I loved the whole process,” he says. “Coming up with the joke, getting the punch line and making somebody giggle. The best thing about doing that comic was when I was at a coffee shop and someone was reading the paper, and they read my comic and they started laughing and told their friend it was funny. I thought, ‘Wow, this is a complete stranger and they’re reading my work and they like it.’ I made (almost) no money off that strip, but that moment in the coffee shop made it all worthwhile.”

Off the Wall ran until Conrad Black bought the Ottawa Citizen in 1997 and pulled Sunday comics from the menu. But Andrew’s talent spoke for itself, and the paper’s editor recommended that he try his hand at animation. Andrew took the suggestion and enrolled in Television Animation at Algonquin College. “I loved the program, it was incredible,” he says. “All like-minded people, had a blast, great education, got a job right after first year.”

The job was as a prop and concept designer at Lacewood Productions (now Amberwood Entertainment) for the animated series The Savage Dragon, and he stayed on throughout his time at Algonquin. When he graduated, he moved to Vancouver and worked long-distance for Montreal-based Cactus Animation on a show called Bob Morane. Then he returned to Ottawa for what he calls “the glory days of animation.”

Andrew made a great living working primarily for a studio called Fun Bag Animation, with additional contracts through MTV and the British Broadcasting Corporation (BBC). But when computer animation broke onto the scene, Fun Bag was caught in the middle of a transition that unfortunately put them out of business. So in 2003, he idly picked up a brush and gave it a crack. “I’d always wanted to try painting, but never really did it,” he says. “I figured it can’t be that different from drawing; I’m just putting colour on canvas instead of pencil. So I tried it and just started entering art shows.” 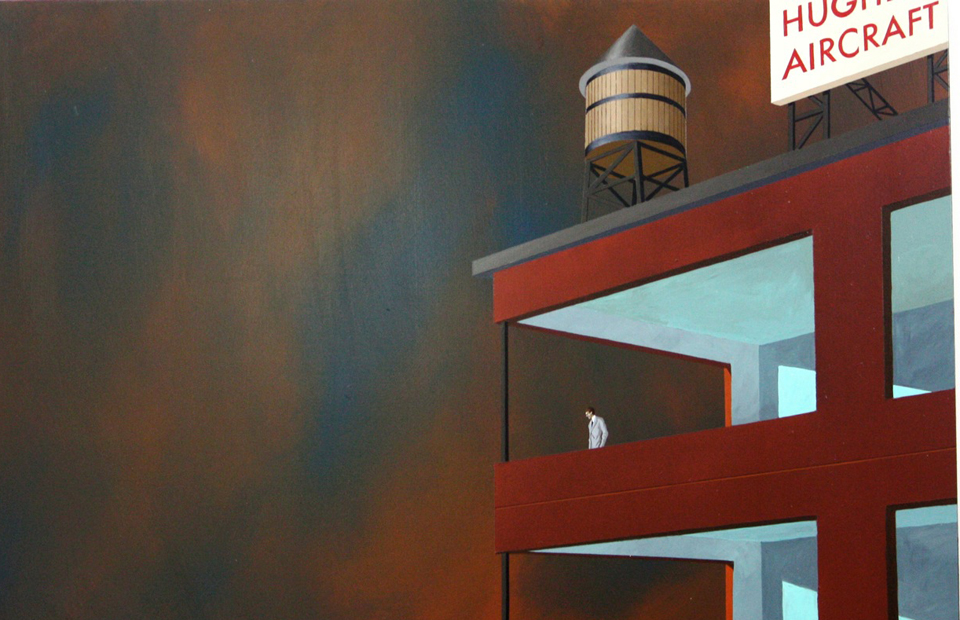 In the eight or so years since Andrew traded in his pencil for a paintbrush, he has become a highly successful painter. His creations are in high demand, and he works full-time in his Westboro studio to keep up. The paintings are regularly on display at three Ontario galleries: Wall Space in Ottawa; Mad Dog Gallery in Picton; and Robert Macklin Gallery in Kingston. His work is also featured at art exhibitions throughout Ottawa, Toronto, Guelph and the Muskokas. He’s currently preparing for the 2011 Toronto Art Expo.

Seeing that I’d been itching for years to talk to him in-depth about his process, I took the opportunity to ask him how it all comes together. To start, he can’t work without music. The playlist ranges widely, and includes Duke Ellington, The Chemical Brothers, Boards of Canada and the Beach Boys. Once the music is rolling, he throws up a background of “any colour. I just put it in front of me and think of something and draw it out. Sometimes it’ll morph. I’ll draw a car, and then I’ll have the car going up a cliff. And then I think, ‘What’s going off the cliff…?’”

Which leads me to my next question. Andrew comes up with amazing titles that add depth, nuance and meaning to his paintings. I asked how those wonderful, evocative titles come to be. “I love movies, I love good cinematography and composition,” he says. “I try to make every painting look like a scene from a movie. So it has that cool widescreen format and it’s telling a story. It’s like a little vignette from a greater story. When I’m painting, I create all this backstory in my head, and the title kind of reflects what’s going on. But I love it when people create their own backstory… I love that it engaged them enough to think about what happened before and what’s going to happen next.” 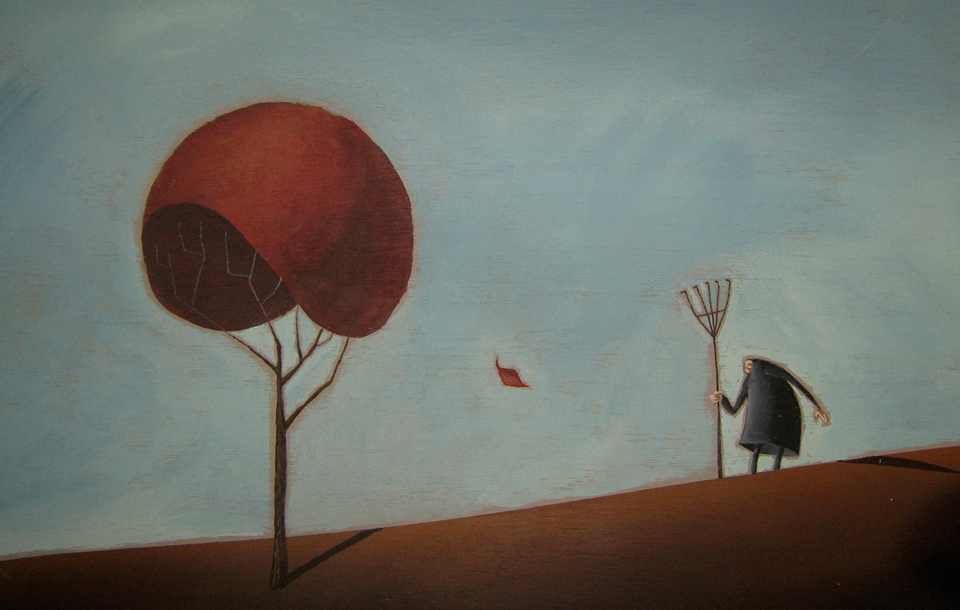 Concern and appreciation for how others respond to his work is a recurring theme for Andrew. When he arrived at the coffee shop for our interview, he launched into a cheerful conversation with the barista about painting, and lauded the man as a great art aficionado. Throughout our talk, he frequently expressed gratitude that the response to his paintings has been so positive, and credited Canadian open-mindedness for much of his success.

“I find that Canada’s very receptive to being creative,” he says. “You can do what you want creatively, and it will be somehow appreciated by someone… I’m super grateful that anyone buys my work, because you never know (how it will be received). I’m doing this because I like it, and I don’t know if anyone else will like it.”

We do! Every year, his devoted fans flock to his exhibitions in growing numbers. It’s a privilege to see his latest works and admire his evolution as an artist. And he has much more in store than just paintings.

The day of our interview, Andrew happily tells me that he’s finally completed the last part of a 24-strip set for a new comic he plans to submit to several major comic syndicates. The strip is called Grumps, about “a grumpy old man, which I think I am inside,” he says.

And then the grumpy old man walks me down the street, where he rescues an adorable two-pound Yorkie-poo from running into traffic, and promptly tucks the pup under his chin while chatting amiably with the owner.

“Grumpy old man.” That’s his backstory. I see an unbelievably talented artist with a very young heart, whose childhood continues to inspire innovation, creativity and magnificence. If only more kids would doodle, read comics, watch TV and movies, play with cars and planes and spaceships…