“As an artist, I’m analyzing my emotions, and then taking a step back and creating from them. I can take that dire, severe despair and create something from it. In doing that, I’m healing myself.”

Eventually, there comes a point at which you can no longer continue down the same path; you’ll hit a concrete barrier that forces you to either change course or stop dead.

For British Columbia’s Jay Peachy, the challenges his lifestyle presented didn’t stem from material needs not being met. After graduating from Simon Fraser University (SFU) with a business degree in 1994, he went on to rise through the ranks of Vancouver’s telecommunications industry, landing a plumb spot at one of the city’s top companies in 1999. But the pressure that came with the company’s ownership change in 2000, taking him swiftly from junior project manager to product marketing manager, brought with it a “tsunami of work and expectation.”

Jay felt himself struggling to maintain balance, oscillating between periods of workaholism during which he thought he could take on the world, and periods of extreme lethargy during which he could barely get himself to the office. Some mornings, he says, “my wife would pull me out of bed, dress me and throw me in the car to go to work.” At the time, Jay had all the material possessions he wanted, let alone needed. But his mental, emotional and spiritual needs were profoundly neglected.

In late 2004, Jay was diagnosed with bipolar disorder, a mood disorder that involves abrupt mood swings from manic to depressive. The diagnosis didn’t result in immediate improvement, but it marked the beginning of a journey that took Jay from a very dark place to one of peace and fulfillment.

Today, Jay is using his newfound artistic talents—which include painting, comedy and hosting—not only to better his own life, but to serve as a mental health advocate for others. He’s also in the process of exchanging those talents to build a sustainable home entirely through barter, with the help of online trading community Swapsity. It’s only been a few months since he started the project, but he’s already purchased a stretch of land in Anmore, B.C., and has gathered many of the materials and supplies he’ll need.

Swapsity founder Marta Nowinska has been so impressed with Jay’s progress that she recommended him as “an inspirational person truly worthy of being officially called a Kickass Canadian.” In talking with Jay for this article, I discovered how he’s rebuilding not only his home, but also his life, through an amalgamation of experience, skill and passion.

Before Jay was diagnosed with bipolar disorder, he knew there was a problem but couldn’t put a name to it. By the time his doctors did in 2004, things were already spiraling out of control. In early 2005, he found himself without a job, at the end of his marriage, severely depressed and sleeping on his parents’ couch. Within a year, his muscles had atrophied significantly and he tipped the scales at more than 200lbs. “I could barely get up and down stairs,” he says.

In April 2006, friends and family felt they were left with no choice; they had Jay committed to the psychiatric ward at Royal Columbian Hospital. Being driven from home in a police cruiser is something Jay describes as one of the lowest points of his life. But in that moment, he was finally moving in a direction that would help overturn his disorder to create a new order that would work wonders for him; it was in the psychiatric ward that he discovered art.

“There was an art therapy session, and they said, ‘Paint what you feel,’” says Jay. “When I started painting, I started bawling because I was painting elements of my life, and it triggered a whole bunch of things. It was very cathartic.”

It took being committed by his family, but after that first session, Jay decided to commit himself to painting every day, and kept that vow during his five-week stay at the hospital. He looked to his own life and the lives of those around him for inspiration, and turned his psychiatric room into an art gallery. 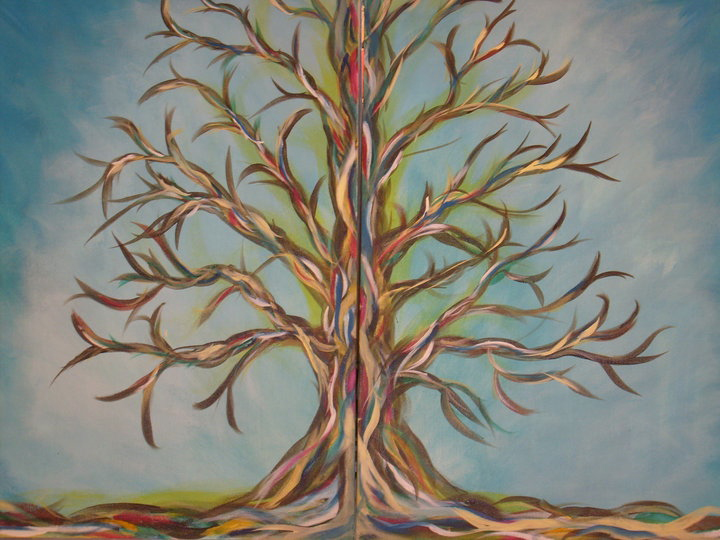 Opening up to art and creative expression made a world of difference to Jay. But the brief time in therapy couldn’t provide an instant cure. When he was released from treatment, many of his old habits resurfaced. “I still wasn’t that well,” he says. “I was on medication, and the pills fixed the chemical side of my disorder. But they didn’t address the behavioural issues.” Left to his own devices, Jay soon resumed his manic tendencies, and threw himself into reviving a golf event planning business he’d started up a couple years before.

Under the pressure of a stressful job and the tumultuousness of bipolar disorder, the seams started to show once again. Facing bankruptcy and the death of his business partner, Jay returned to his parents’ couch and to depression. 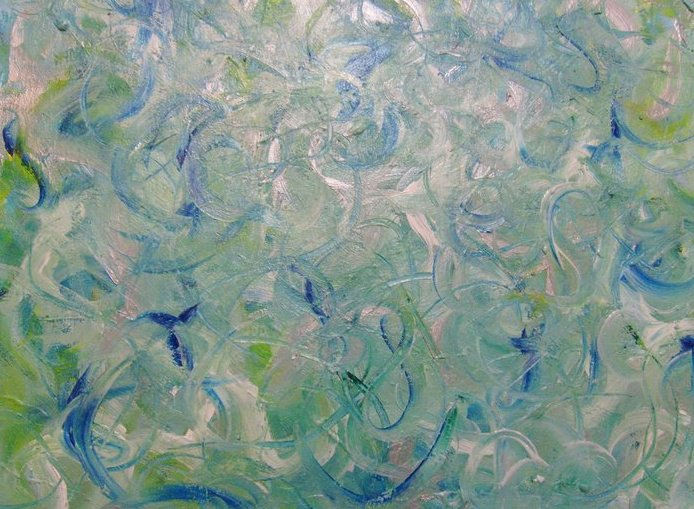 But it wasn’t quite the same this time around. Although he was staying in the same place as his last serious crash, his head wasn’t in the same place at all. Jay knew he had to pull himself up off the couch. “I was going crazy in my parents’ house,” he says. “I needed to go out and find a place of my own, a place in nature… I knew I would find something that was right for me; I’ve learned that the universe lines up when you’re genuine and honest about your intentions.”

With the best of intentions, Jay went looking for a new home. Through that process, he discovered the Village of Anmore, the Mossom Creek Hatchery, and his current landlord Elaine Willis, whom Jay credits with having turned his life around.

Jay and Elaine had a special connection from the start. She’d had her own challenges with facing and overcoming disabilities, and understood the social side effects of mental health issues. When Jay opened up about his struggles, she could relate to what he’d been through. “She started crying and hugging me,” says Jay. “Then she said, ‘Okay, you’re going to be my tenant.’”

Before long, Jay joined Elaine as a volunteer at the Mossom Creek Hatchery in nearby Port Moody, B.C. Jay spent countless hours at that “magical place,” feeding the salmon and helping to restore some of the population that has been—and continues to be—depleted on the West Coast. It was in reconnecting with nature and witnessing the cycle of life that Jay felt inspired once again to paint. 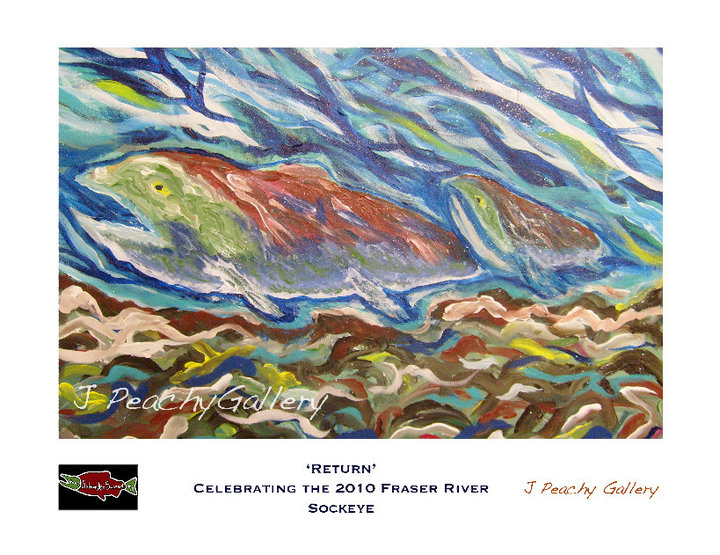 “When you’re in nature, you don’t have to do anything; you just have to be,” he says. “When you stick your feet in the sand, or look at a tree swaying in the wind, you can feel the energy. It’s so amazingly powerful, and I take that into my life and put that into my art, and people react emotionally.” 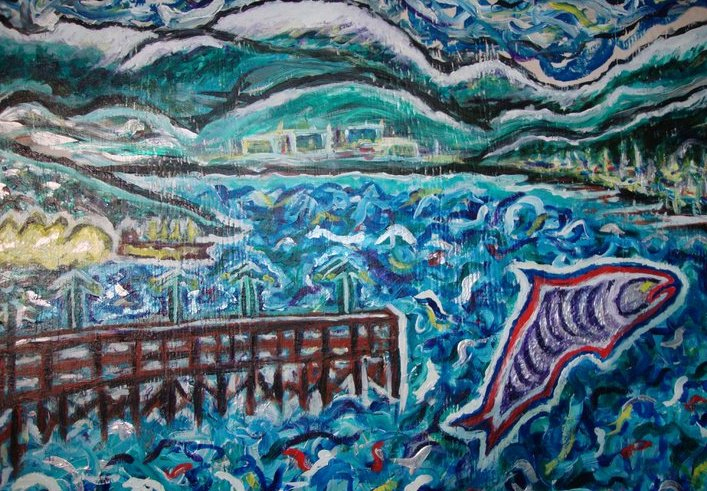 Tuning in to art

Inspired by his surroundings, Jay dove headfirst into art, painting abstract landscapes “as an expression of my connection with nature.” He also returned to using art as a means of working through his thoughts and feelings. “As an artist, I’m analyzing my emotions, and then taking a step back and creating from them. I can take that dire, severe despair and create something from it. In doing that, I’m healing myself.” 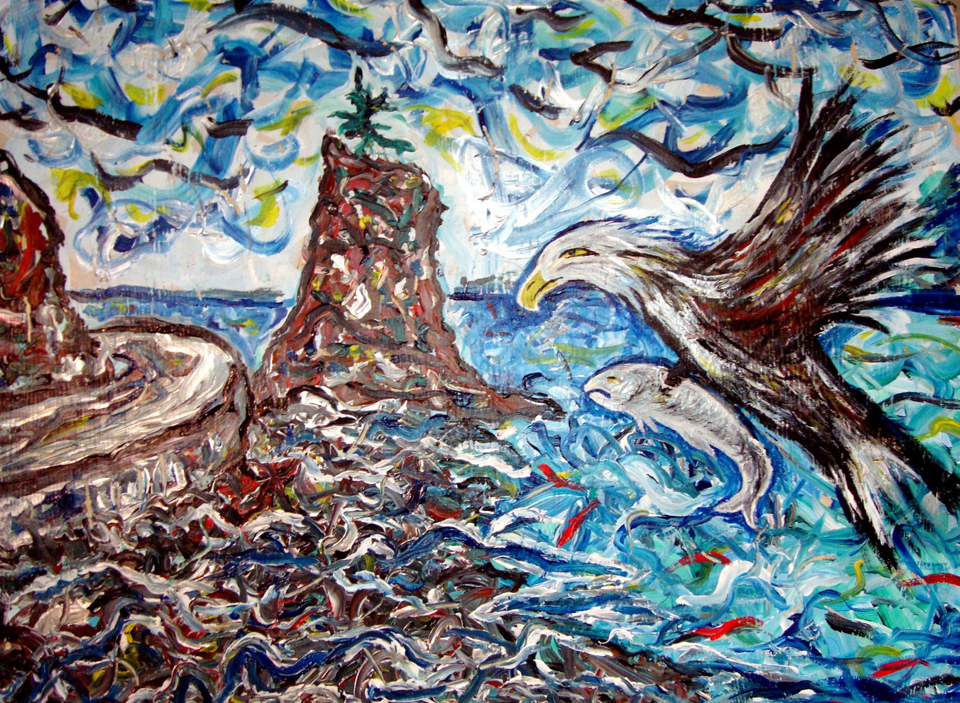 His work has done more than heal him; it’s gone on to help and inspire countless others. Jay is a member of Gallery Gachet, an artist-run creative centre for mental health advocacy, and is also the Vancouver caucus leader for the Artists’ Alliance for Mental Health Canada (AAMHC). He speaks openly about the importance of acknowledging and treating mental illness, and is a huge proponent of “art as a means for survival.” 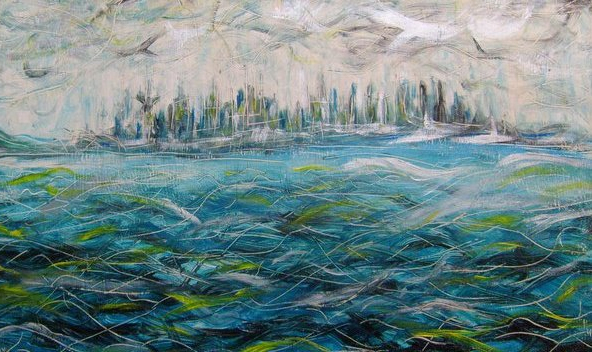 In addition to his paintings, which have been exhibited in galleries across the country, Jay is perfecting his comedy routine with Stand Up for Mental Health, and is the proud host and producer of Sound Therapy Radio, an arts and mental wellness show that airs Tuesdays at 7pm on CJSF 90.1 FM. As of September 2011, the show will also be seen on VCommunity TV, which broadcasts through Shaw Channel 4 Vancouver and Cable 11 Victoria. 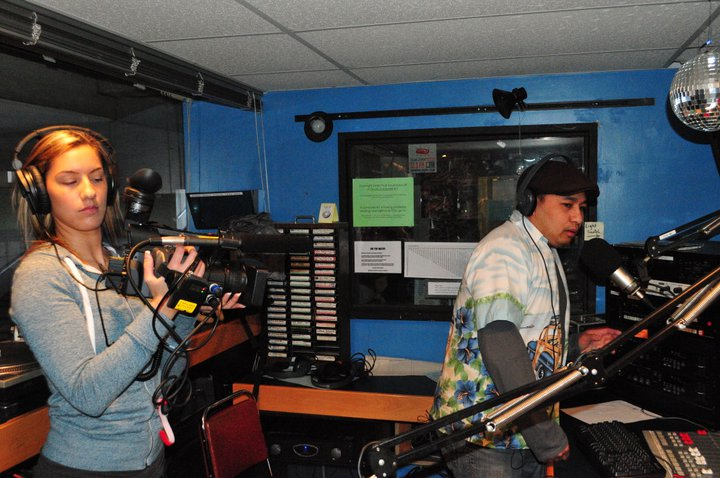 “The whole concept behind Sound Therapy Radio is to create a dialogue with other artists about how art is a healing mechanism,” says Jay. “It’s an opportunity to talk about art as well as mental health issues. It’s important to get that conversation started… I find that the more honest I am (about my condition), the easier it is for others to understand where I’m coming from, and for me to manage my emotions.” 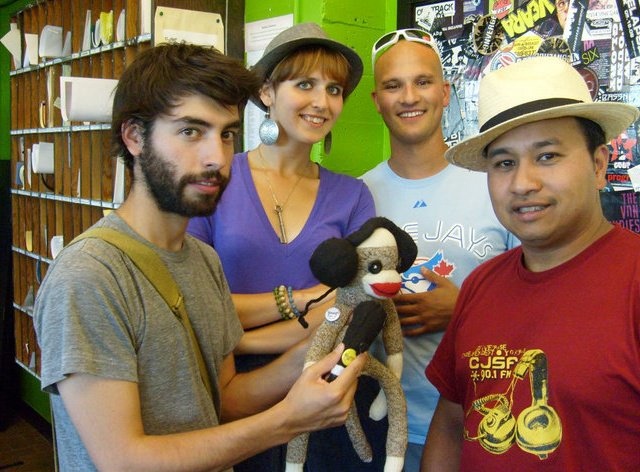 Jay has found other ways to apply his creativity toward a strong foundation for his future. With help from Marta and the Swapsity gang, as well as family, friends and neighbours, Jay is moving forward with plans to build his barter-based Anmore home, which he hopes to complete in late 2012.

“The house is an art project in and of itself,” he says. “It’s about survival and creativity; finding ways to channel and focus my emotions, and to create a house by working with the skills I already have, rather than spending and going into debt.” Not only that, but by reusing and repurposing materials, Jay relishes the opportunity to “save one more item from the landfill” as many times as he can.

His goal is to build a home that is accessible and beneficial to everyone in his community. “When we start construction, I’ll be looking at providing job opportunities for people in the local community,” says Jay, “particularly those who have been marginalized and not been given the opportunity for employment because of disability or other social circumstances.” He’ll also ensure that the house is built to suit those with chemical sensitivities, including his landlord Elaine, and to welcome friends with physical disabilities.

Once the house is complete, Jay plans to follow an open-door policy, sharing his creation with the community. His living room will serve as an “art gallery / café / jam lounge,” where anyone can come to retreat, create, or be closer to nature in rural Anmore. 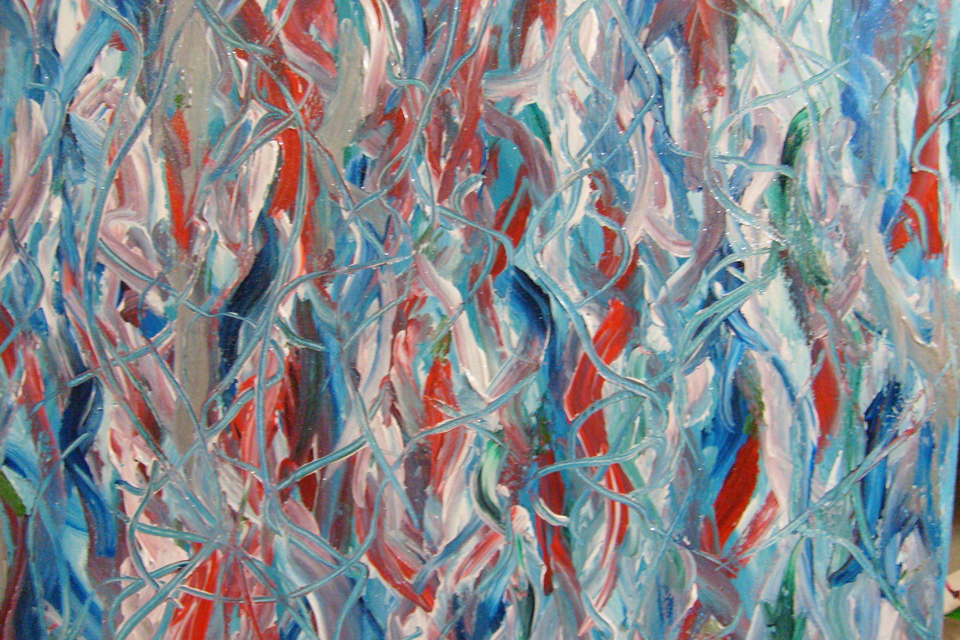 “At the end of the day, this whole house project is about love,” he says. “Because of my love for the environment that saved me, I want to take as little as I can and live sustainably by exploring alternative power sources… Because of my love for the people in Anmore, I want to stay in this community. Elaine, the people at the hatchery, they all take care of me, and this house provides a way for me to stay here. I’ve been able to begin building this home while I was essentially rebuilding my life and learning to trust others. None of this would have happened if I didn’t have faith in other people, and if they hadn’t believed in me.” 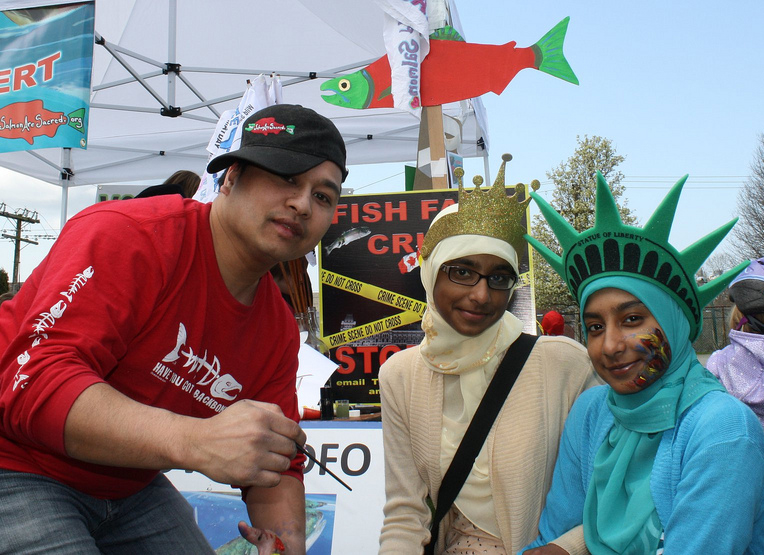 Jay volunteering as a facepainter at the Wild Salmon Booth during the Vancouver Earth Day Parade, 2011

He may have taken the winding route, but Jay’s path has landed him in a place where his lifestyle benefits not only him, but everyone around him. He’s giving back, taking only what he needs, sustaining life through creative means.

The house should open in a year’s time or more. But Jay is already home.