“I was told I would be paralyzed for life. Now I teach others to look beyond the seemingly inevitable.” 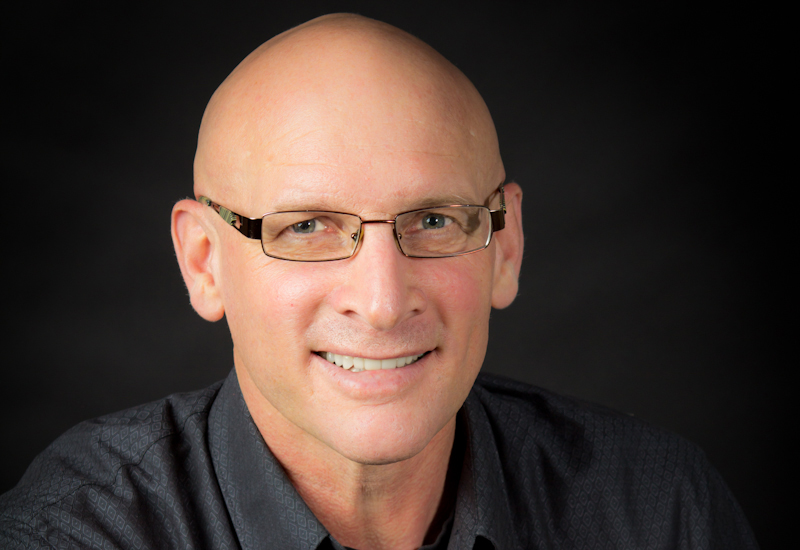 Doug Smith has lived one of the most awe-inspiring stories of overcoming adversity. Since interviewing him through work in early 2010, I’ve come back to his wisdom and philosophy many times in coping with my own injuries (chronic and frustrating, yes, but nothing compared to what he survived). I asked him to be part of this website because he’s helped me stay positive and focused, and I want to do what I can to share his story so others can draw strength from his experiences.

If you aren’t familiar with pro hockey, you may need a bit of a crash course in Doug’s career. The man is nothing short of a sports prodigy. As a new graduate from Ottawa’s Bell High School in 1981, he had the option of pursuing a professional career in four different sports—golf, lacrosse, tennis and hockey. Thanks to his parents’ predilection for the ice, he ended up taking a spot on the Los Angeles Kings when he was selected as a first-round draft pick. From there, he went on to play for the Buffalo Sabres, Edmonton Oilers, Vancouver Canucks and Pittsburgh Penguins.

Doug’s time on the Buffalo Sabers holds his fondest memories of the sport, an experience he likens to being a rock star. “There was a constant line-up that existed in front of you telling you that you were something special,” he says. “It never ended.” The highlight of his professional hockey career came in 1986 during his third game with the Sabers, in which he matched up against Wayne Gretzky and Mark Messier on the Edmonton Oilers—the Stanley Cup champions at the time.

“I scored the game-winning goal at the 18:29 mark of the third period,” says Doug. After that, it was like an explosion went off. “I was doing music videos, TV commercials, I was doing everything you can imagine as a professional athlete. You know the movie Jerry Maguire? All of a sudden, I was that guy.”

‘Doug Smith’ became a household name, and all signs pointed to a long and lucrative NHL career. But in the summer of 1988, a head-on collision on Ontario’s Callabogie Road left him with a severed scapula and massive nerve damage in his shoulder. He was told he’d never play pro hockey again.

Fortunately for Doug, he was never one to let others define his boundaries. Less than a month after being given the go-ahead to start lifting weights, he’d packed on 25 pounds of muscle. Within a matter of weeks, he was signed to the Edmonton Oilers. Not only did he play pro hockey again, he played for another four years.

As it turned out, the 1988 collision wasn’t to be his last head-on trauma. When he was playing in the European Hockey League in 1992 he suffered a far greater injury. Going at full speed on a fore-check, he slammed into the boards and shattered his neck in more than 100 places. Complications from the injury left him paralyzed. It was just one week after the birth of his second daughter. 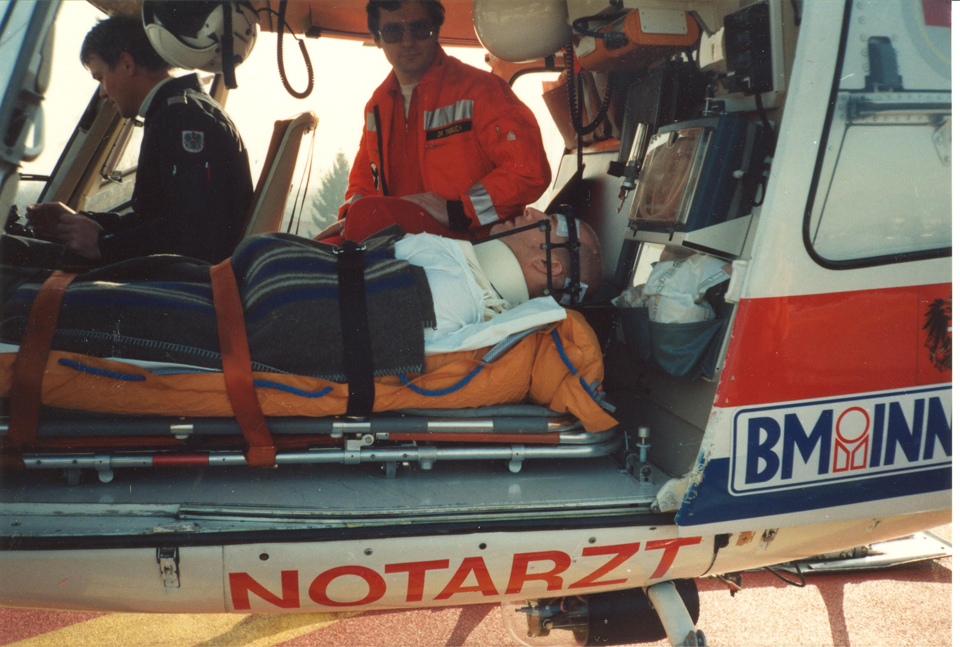 Doug being airlifted to the hospital after shattering his neck

While recovering from his first collision, he never doubted he’d be back on the ice. The second time around, he didn’t feel he had the strength to keep going. That’s when he relied on the strength of those around him to pull through.

“When I was so afraid I couldn’t go any further, my wife kicked me in the you-know-what,” he says. “It only takes one person to change the belief of the world. In my case, that person was my wife (Patti)… Everybody needs somebody to say, ‘It’s okay, you can do that.’”

Looking beyond the impossible

With the support of his family, Doug narrowed his focus on doing exactly what needed to be done, one step at a time. During the year he spent in a hospital bed recovering his physical strength, he also rallied his inner strength; he became one with his computer, teaching himself the fundamentals of business.

When he was released from the hospital and standing on his own two feet—defying medical odds once again—he wasted little time getting started. Among other ventures, he launched Arc Stainless Inc., a business that started in his garage and has since grown into a highly profitable stainless steel medical and architectural products company, with an impressive list of clients that includes The Ottawa Hospital (TOH) General Campus. 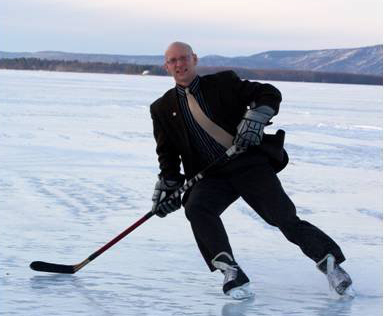 Alive and well after being told he’d never walk again

Doug is still involved in the business development side of Arc. But he takes greatest pride in spreading the message that everyone has the capacity to overcome adversity and achieve far more than they ever thought possible. “I was told I would be paralyzed for life,” he says. “Now I teach others to look beyond the seemingly inevitable.”

He’s accomplishing that goal through a series of books that reflect on his personal experiences and demonstrate how his approach to overcoming obstacles can be applied to success in any area. The key, he says, is understanding how the subconscious mind communicates with the conscious mind.

His first book, Thriving in Transition, was released in spring 2010. It outlines his life story from birth to the year after his spinal cord injury. He also co-authored a book called The Power of the Platform, which was published by the Las Vegas Convention Speaker’s Bureau.

In spring 2011, he’ll release The Trauma Code, his first publication with business partner John Brooks. It’s in The Trauma Code that Doug explores the impact of the subconscious mind, and helps uncover the code to being able to communicate with that part of the brain. 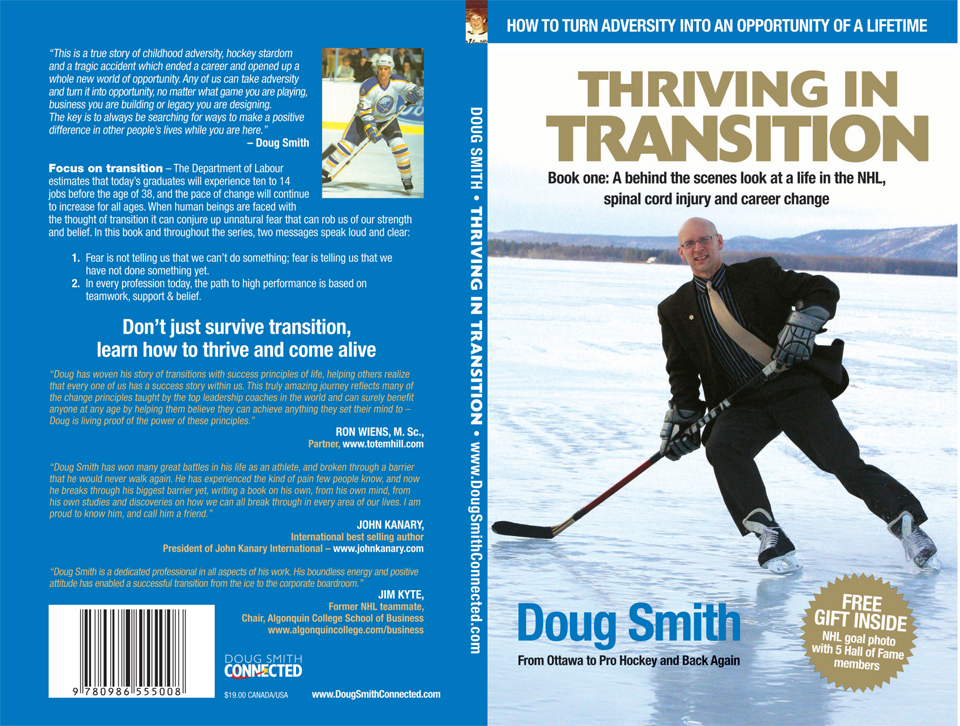 Unraveling the mystery of the mind

“The subconscious mind records everything in our past,” says Doug. “If we’ve had trauma in our life, be it physical or emotional, that’s where the trauma is stored.”

As he explains, each of us has been conditioned to see ourselves in a certain light. Such conditioning governs our performance, our success, even our happiness. Recognizing and understanding that conditioning is essential to breaking through and realizing one’s potential.

“There’s a code in talking to the subconscious mind,” he says. “What The Trauma Code is doing is deciphering the code, breaking it down and giving it to you so that you can understand how to unlock the code… We’ve taken my story, the adversity that I’ve overcome, and then we’ve married that to the scientific research associated with how the brain works to show how you can achieve the same thing or overcome the adversity in your life.”

Given the extremity of the obstacles Doug has surmounted, I ask whether he still gets irritated by life’s smaller challenges—getting a cold, having old injuries act up. He makes it clear that he’s just as frustrated as the next person when his physical limitations get in the way. But because he’s been using what he calls the keys to unlocking the door to his subconscious, he’s in a much better position to assess the situation objectively and make positive choices.

“I tend to look at how I’m feeling in those particular instances and examine where that feeling is coming from,” he says. “Whether I’m actually helping myself get better and stronger or whether I’m hurting myself.”

That’s a lesson Doug took several years to learn. Looking back on his days in the NHL, he sees now that was very reactive and not prone to thinking things through.

“Having an edge when you’re a professional athlete helps you,” he says. “You’ve gotta push people out of the way, that’s the nature of that economy. But it’s not the nature of the real world… I firmly believe that in life, until we hit something hard enough, run into something that shows us that it isn’t all about ‘me,’ we won’t be ready to make a change.”

In Doug’s case, he was hit plenty hard. Twice. Before the second collision in 1992, his focus was almost entirely on him and meeting the goals he’d set out. “On the ice, it was all about winning,” he says. “It was all about being the best in the world at something.

Since ending his professional hockey career, Doug has found many ways of giving back to the community. While he was still in the hospital, he began plans to launch the Ottawa Senators Alumni Association, and he continues to be actively involved. Thanks to his efforts, the association has raised more than $3 million for local charities, including the Children’s Hospital of Eastern Ontario (CHEO) and Rogers House. He’s especially proud to have contributed to the Ottawa Rehabilitation Centre at TOH General Campus, where he lived during his recovery, and to the Campus’ new virtual reality system that helps members of the Canadian Forces recover from spinal cord or head injuries, or from the loss of a limb.

Doug sees the symmetry in the fact that his professional hockey career has enabled him to make such significant contributions; in his mind, he’s come full circle. He went into the sport focused solely on him. Today, he’s in a position to help others benefit from his experiences, both through his connections to the hockey world and through the lessons he learned from his injuries.

“I want to leave a map so that people can pick it up—my kids can pick it up—and say, ‘Look! With this huge tragedy comes huge prosperity,’” he says. “I think it works the same for everyone… Whether your trauma is physical or emotional, The Trauma Code gets you moving.”

The Trauma Code will be released in spring 2011. For the latest information, visit thetraumacode.com.