“Canada has evolved into this amazing multicultural tapestry of life and culture from around the globe. What better way to celebrate that, to celebrate who we are, than to plug all the people who live here into the flag.” 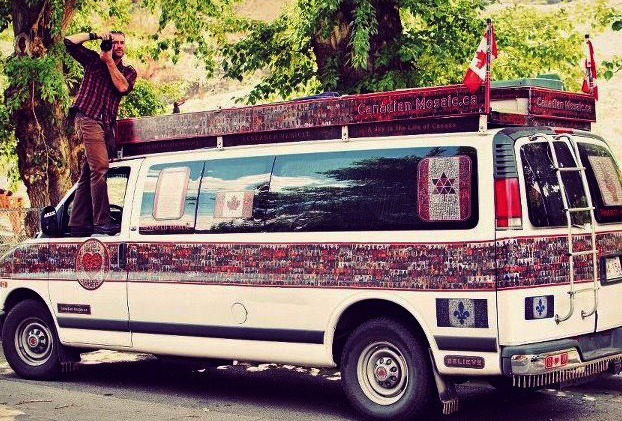 It’s an unusual way to spend a decade. But Tim Van Horn has no doubt he’s doing exactly what he’s meant to do.

Since 2008, he has been travelling the country to photograph people from all walks of life for Canadian Mosaic, a massive photo collection that will be unveiled on Canada Day 2017—when the country celebrates 150 years. He shoots each subject in front of a red or white backdrop so he can incorporate each portrait into the Canadian flag, a “universal symbol that all Canadians have an inherent relationship with.” His goal is to “reinvent, redesign and rethink the flag, using thousands of portraits of Canadians.” 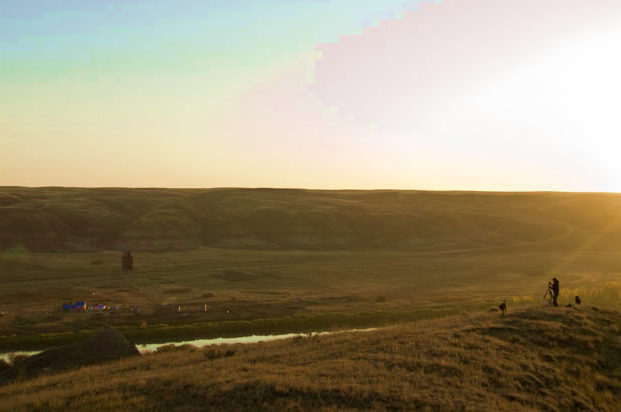 Tim shooting on the first day of the Canadian Mosaic journey

The project team is comprised of Tim, his van Maple, and his dogs Mya and Bo. Their journey began in Red Deer, Alberta as a 150-day road trip, during which Tim planned to head east, shooting portraits of Canadians and raising awareness of our country’s 150th birthday. But somewhere along the way—at McGill University in Montreal, Quebec, to be precise—he “started to see the power of illustrating our individuality and the need to put a face to our ever-changing cultural diversity.” 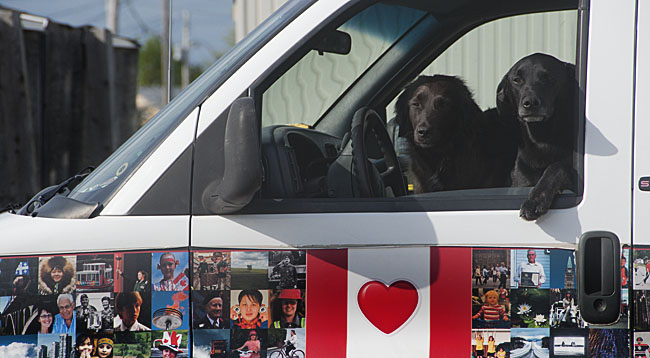 Tim, along with Maple and the canine crew, kept on trucking. By the time they’d reached Newfoundland, he knew what he had to do to complete his goal—and fulfill his destiny. “Canada’s massive, Canada’s huge,” he says. “You can go straight across Canada, but when you really look at the map, there’s so many little nooks and crannies, places that you have to go to, to truly represent this country.” So he committed to spending the next nine years capturing approximately 36,000 portraits (representing 0.1 percent of Canada’s projected population for 2017).

“What it comes down to is doing an honest job of representing everybody from all regions,” he says. “My mission is to create the most comprehensive look at who we are and to create a legacy, and you just can’t do that in 150 days. It takes several years to create something that’s so all-encompassing.”

He took 265 portraits in 2008, and has increased that number exponentially each year. On Canada Day 2011 alone, he snapped 2,700 portraits. To date, he’s got more than 13,000 portraits on file, making his collection “the largest portrait created on the Canadian people. We’ve never had anything done on Canada that’s this massive, this comprehensive, that’s from all angles and from all over the country… Canada has evolved into this amazing multicultural tapestry of life and culture from around the globe. What better way to celebrate that, to celebrate who we are, than to plug all the people who live here into the flag.”

In talking with Tim, it’s clear he’s fueled by an intense passion for his project. But his devotion goes deeper than that. Raised in a military family, he grew up travelling the country and was instilled from birth with a strong sense of duty. He’s also been an avid shutterbug from the tender age of four and always dreamed of trekking across Canada to photograph its people. 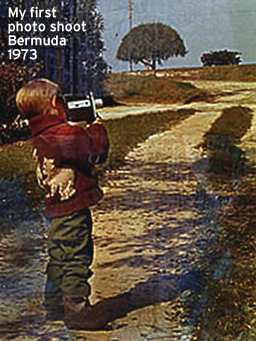 These are the pieces of his life’s puzzle that make him believe, in his soul, that he was destined to create Canadian Mosaic. As he sees it, “My life duty is to create visuals that define our cultural identity here in Canada, to be unbiased, and to create something that is magical—that serves the imagination, that makes people consider who they are, who we are collectively.”

His purpose became a lot clearer when he decided to veer away from his lucrative commercial photography career in Calgary, Alberta and focus instead on the Canadian landscape. A graduate of Alberta College of Art + Design (ACAD), he was an award-winning photographer with a strong client base. But in 1998, he turned down a big corporate job in favour of capturing “the rapid demise of the country grain elevator.” The decision represented a significant pay cut, but it afforded him the opportunity to spend four years putting together “massive documentation on the elevators coming down and on the impact it had on local communities.” His work resulted in Echoes from the Dust: The Disappearing Prairie Grain Elevator, a national travelling exhibit with Calgary’s Glenbow Museum. 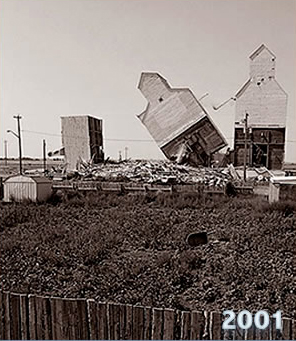 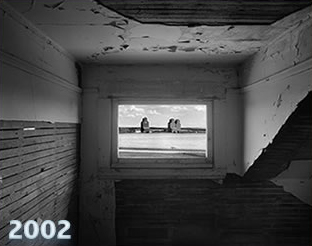 In the wake of Echoes, Tim moved on to create a 265-page coffee table book for Alberta’s centennial in 2005, featuring photos of 350 Albertan towns. The publication sold 10,000 copies and landed in every school and library in the province.

He loved the direction his work was taking. But in 2007, he decided he needed to branch out of his home province if he was ever going to establish himself as a national photographer. And from there, Canadian Mosaic was born. He learned how to build a website, fixed up Maple and headed into the great wide open. 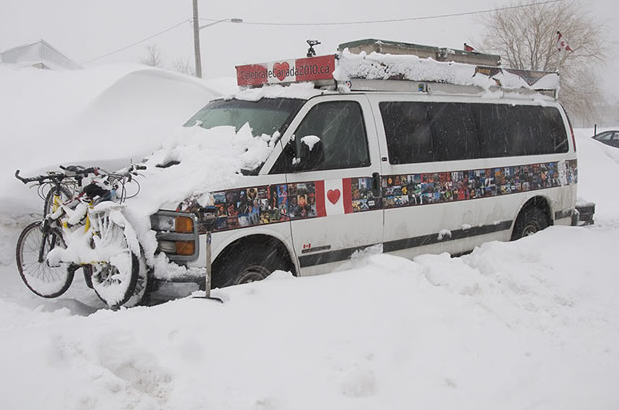 Maple in the winter, Vancouver, B.C.

Weaving it all together

As I type this article, Tim is in the midst of preparing a campaign to stir up awareness of Canada Day 2017 and to approach major Canadian cultural institutions—including the National Gallery of Canada (NGC), the Canadian Museum of Civilization and the new Canadian Museum for Human Rights—about displaying his incredible work when the big birthday arrives.

“My goal is to get a massive mosaic of 80 to 100 feet wide by 25 feet high, and basically custom-build it to the room in which it’s going to be displayed,” he says. “The whole wall will be one huge national mosaic in the shape of the Canadian flag, and the other three neighbouring walls will likely feature mosaics in the shape of the provincial flags. Every region will be represented in some way, shape or fashion.”

Quebec mosaic made from portraits taken in the province in 2011

He also has plans to highlight the top 50 portraits he feels best represent our cultural identity, and to create an exhibit called Capture the Flag, which will feature photographs of flags taken at national landmarks and even the flags themselves (taken only with authorization).

The exhibits aren’t the only things on his mind. As his itinerary has expanded, so has the concept for Canadian Mosaic. Since it first took root, the initiative has evolved into Canada150.me, a site that has become the hub of all Tim’s brainchildren and will eventually house a range of educational resources about our country. 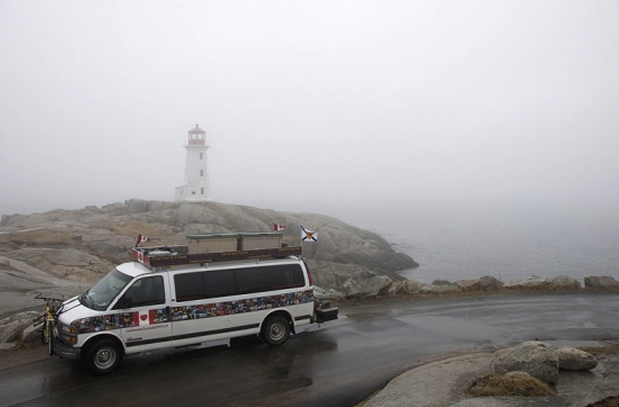 “(Our schools are) going to be losing the textbooks and going to tablets eventually,” he says. “So for 2017, I see an opportunity to create a bunch of contemporary web-based learning resources that will enable kids to learn Canadian studies online. It’s one thing to create this mosaic and art, and I think that’s important, but I think education is becoming more and more of an asset.”

As he gathers portraits, he’s also recording audio clips of some of his subjects. He plans to cull his photographs and recordings to develop “innovative ways to teach students about cultural identity in a way that reflects every part of Canada.” 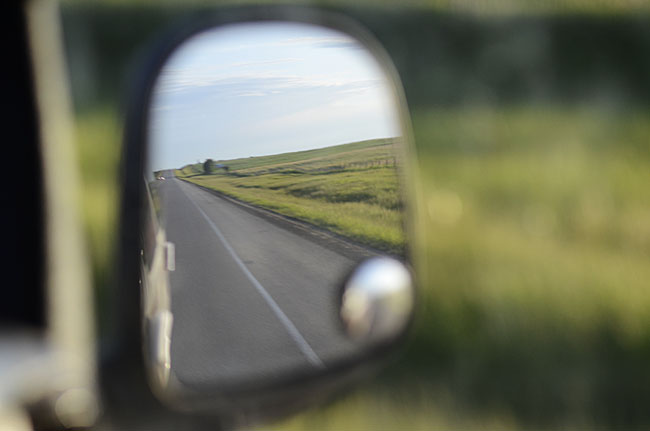 In developing such valuable learning materials, Tim is helping write the history books for future generations. He’s also helping today’s Canadians find their own place in history—something he feels they’ve each been waiting for, in their own way.

“I honestly believe that if people dig deep enough into their psyches, they’ll find that they all expected a photographer to show up in their life and immortalize them,” he says. “People want to be part of something big, want to be immortalized, and this sort of facilitates that… There’s a need for what I’m doing.”

Tim (centre) with some of his subjects on Canada Day 2011, Vancouver, B.C.

That need, he feels, isn’t specific to Canadians. It’s a universal need. But it’s also one that couldn’t be better met in any other country. In trying to redefine the Canadian identity, Tim has encountered tens of thousands of people, and has arrived at the following conclusion: our identity is that of a world citizen.

“We’re educated, we’re fairly liberal, we’re open-minded and we contain the world’s cultures here,” he says. “We’re very much a universal country, so the best way I can describe who we are is to say that we’re world citizens. And I think that’s something to aspire to be. We can say we’re Canadian, but why don’t we broaden our identity with this idea of being a world citizen—caring about the environment, caring about human rights, trying to live healthily, trying to get along and co-exist.

“The idea behind the Canadian Mosaic is that it’s a story of life that happens here in Canada, but the story itself is universal. It’s about our collective humanity. The country’s 150th birthday is just an opportunity to reflect upon who we are, but it goes way beyond that. The idea knows no borders.”

You can support Tim and the Canadian Mosaic by purchasing one of his beautiful posters through his online store.

Thank you to designer extraordinaire Lee-Ann Hall (who worked on my Wonderpress children’s books) for recommending Tim.