“I got a lot of deeply moving, personal stories from people… It was amazing the ripple effect that I realized you could have by making a piece of art.” 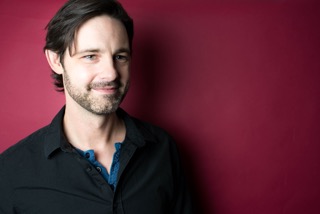 Within Canada’s film, theatre and television circles, Matthew (Matt) Edison is one of the most respected actors and writers working today. He’s starred in stage productions across North America, including The Real Thing, Proof and Amadeus (for which he won the inaugural BirdLand Theatre Young Actor Award in 2003). His film credits include Harriet the Spy 2 for Disney and Flash of Genius for Universal Pictures. As a writer, he won rave reviews for his play The Domino Heart and penned the screen adaptation of CBC Television’s Othello.

I’ve known Matt since he was a teenager, and even then his penchant for creating was abundantly clear. We studied acting together under Kickass Canadian Trevor John Leclerc, at Ottawa, Ontario’s Trevor John Studios (TJS), and it was obvious he had a force inside him that was looking for an outlet in any medium available. “I paint, I play music, I like cooking, I love carpentry,” says Matt, who is also guitarist and lead singer for the Toronto-based band No City Fun. “I like making things, is the way I look at it.” (That trait may run in his genes; Matt is the great-great-great-grand-nephew of Thomas Edison.)

While at TJS, Matt also showed a strong desire to takes risks, professionally as well as creatively. He made waves among his classmates when the story of how he landed his first paid acting gig broke out. He’d tagged along to a friend’s audition for Nickelodeon’s Are You Afraid of the Dark? and decided to give the part a whirl himself. Unrepresented, he picked the name of an Ottawa agent and filled it in on his audition form.

When Matt got the part, he also got an interesting call from the agency he’d listed. They told him off for falsely stating that he was a client. In response, he explained his reasoning: “Well, if I didn’t get the part, you wouldn’t have known anyway. And if I did get the part, maybe you’d take me on.” He did, and they did. 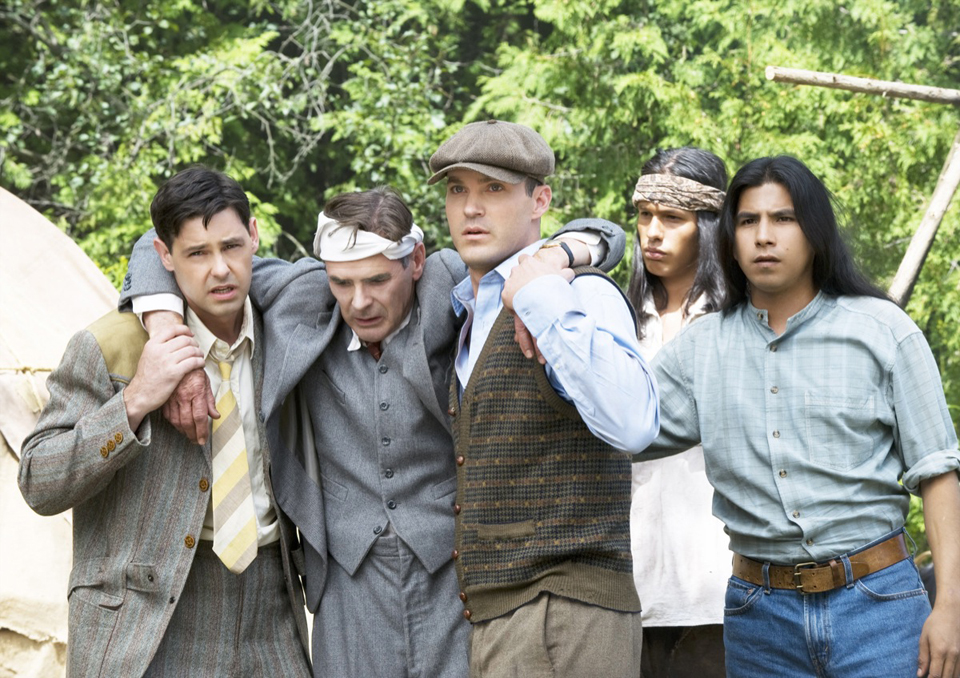 Turns out it was a smart move on both their parts. While in Ottawa, Matt brought in a lot of work for the agency. Then, after graduating from his hometown’s Canterbury High School, Matt spread his wings and landed in New York City, where he spent two years studying at the Stella Adler Studio of Acting. He chose the school in part because of its prestigious alumni, including Marlon Brando, Robert Deniro and Michael Moriarty. Matt also went there because most of his high school classmates were heading to Montreal’s National Theatre School (NTS) or London, England’s Royal Academy of Dramatic Art (RADA). In New York, without the people he’d spent the past few years trading lines, “I had an opportunity to go and reinvent myself,” he says.

After completing his studies at Stella Adler, Matt found work at a repertory company in Manhattan, and also travelled to Scotland, where he performed in two shows at the world renowned Edinburgh International Festival. He played Bassanio in Shakespeare’s The Merchant of Venice and was part of an ensemble cast in Where Raven’s Rule, a play about the Bosnian War.

Where Raven’s Rule, which won first place at the Edinburgh Fringe Festival, involved a lot of mask work—something Matt thrived on. “We were all onstage the whole time, morphing between characters and images,” he says. “It was just amazing theatre.”

Writing from the heart

When Matt returned to Canada—a decision he says was due both to logistics and a love of his home country—he found early success as a writer with his play The Domino Heart. “It’s weird that people connected with it, in a way, because it’s four monologues, which normally is enough to put anyone off,” says Matt. “I got a lot of deeply moving, personal stories from people after they had seen it, total strangers. It was amazing the ripple effect that I realized you could have by making a piece of art. (Because of the play), I immediately connected to all these people I don’t know.”

It makes sense that audiences are so able to relate to Matt’s writing. He often draws inspiration from those around him, listening to conversations at restaurants or on the bus to hear what people care about and how they communicate it. For Matt, life constantly informs art.

“I think that’s the starting point (of inspiration) for me,” he says. “Usually it’s something from life or my experience or the world that I see around me… More than anything, it’s a curiosity, kind of a what-if. ‘Why do people do that?’ or ‘What if we could put that kind of person in this scenario?’ Then I write it out or play it out and see what happens. And if it excites me enough, sometimes I’ll develop it.”

Matt sees writing and acting—in fact, art in general—as an integral part of our humanity. For one thing, it teaches you about morality. “I learned a lot about the world and the truth of how people are to each other and what the consequences are from reading plays,” he says. For another thing, it can help free people to express themselves more honestly than they might in their daily lives.

“In a weird way, you can be more truthful with a mask on than you can be as yourself,” says Matt. “I was, like a lot of people in theatre, more introverted than extroverted. One of the things I learned with acting is that if I’m playing a character… I can say and do whatever I want and people will assume it’s part of the character I play.” 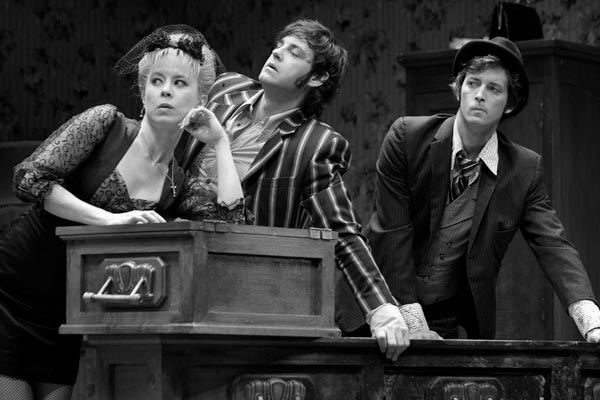 Matt (centre) as Hal in ‘Loot’ at Soulpepper Theatre

Given the importance art plays in Matt’s life, it’s no surprise that he encourages other young Canadians to pursue a career as an actor, writer or musician if their hearts prompt them to. He laments the fact that so little press is given to the possibility of a life in the arts. “No one ever tells you that you can become an actor or musician,” he says. “It’s like a fantasy.” Whenever Matt does talkbacks with students attending his plays, he makes a point of stressing that it is possible to make a living as an artist in Canada. “I just bought a house. You can do it.”

Getting Canada on the map

Still, Matt has no illusions about the limitations imposed on actors who stay in the country. Making a living is one thing, but to achieve significant success, “you have to leave Canada,” he says. “It’s true, and it’s always been that way.” People constantly advise him to move from Toronto to Los Angeles. He doesn’t want to and has no plans to do so. But he’s aware that if he landed a role on just one pilot season of an American television series, he could likely return to Canada and anchor the rest of his career on his success south of the border.

“I think it’s a really sad comment on our self-loathing,” says Matt. “It’s an insecurity issue and it need not happen. When you go around the rest of the world… and you hear people talk about Canada, they talk about Canadians with such high regard.”

Matt feels we have a long way to go as far as bolstering our film and television industry. But there are signs of change in the air, at least with respect to television. Hit Canadian shows such as Flashpoint, Being Erica, Rookie Blue and Corner Gas have been picked up by American broadcasters after garnering accolades in their homeland. The acquisitions may have had something to do with the downturn in the economy and the fact that our programs present a less expensive alternative for American networks. Nonetheless, it’s a reversal of the way things have traditionally worked for Canadian performers and productions, and a trend Matt hopes to see continue.

For his part, Matt’s doing what he can to make an impact on Canada’s arts scene. His band plays regularly in Toronto, and he has several acting jobs lined up for 2011, including a remount of Morris Panych’s Lawrence and Holloman in Saskatoon, Saskatchewan. He’s also working on a feature film adaptation of Peter Sellers’ short story, Avenging Miriam, among many other writing projects. 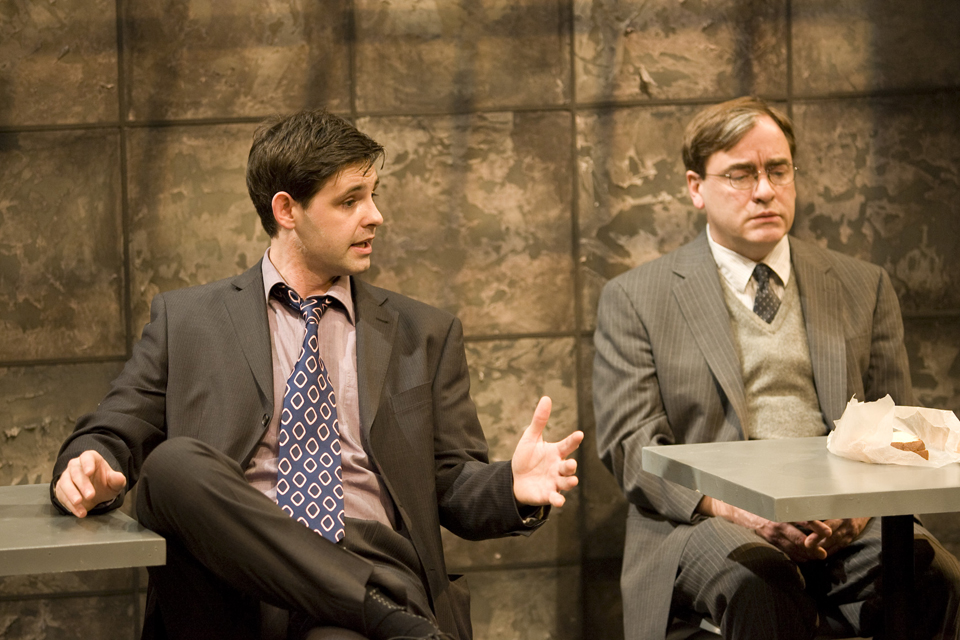 One of his primary goals is to create work that people across the country can relate to. As he sees it, the best way to do that is to put aside preconceptions about what qualifies as Canadian, and instead simply speak from the heart. “When you hear Canadians talk about what they want to see, they want to see their own world reflected back at them,” he says. “It has nothing to do with telling ‘Canadian’ stories. It’s just being a Canadian telling a story.”