“I think we are really at our turning point… I’m not willing to give up yet; I’m going to keep fighting. I believe the power of photography is the one thing that’s going to sway people.” 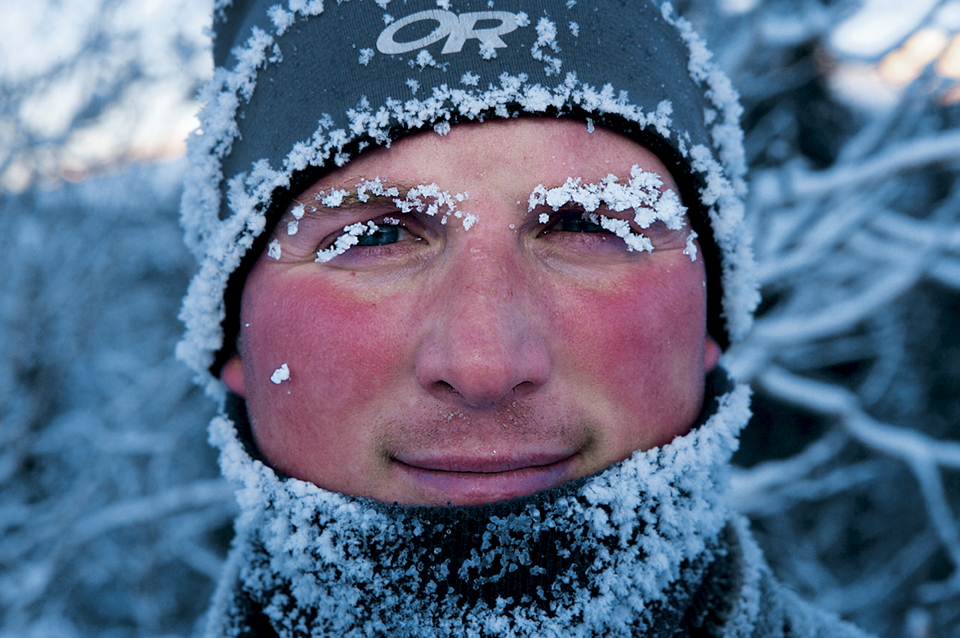 Paul Nicklen is one of the world’s leading wildlife photographers. His staggering, transformative shots of the Polar Regions and their inhabitants, including leopard seals, whales, walruses, polar bears, penguins and narwhals, have been making waves for nearly 20 years.

Information about Paul’s life and accomplishments abounds. That’s one reason I’m not going to chronicle it all here, in typical fashion. They say a picture is worth a thousand words, and I wholeheartedly agree. But given that assembling a photo essay of Paul’s life isn’t an option just now, I’ll try instead to put a picture into words. A few pictures, actually.

Here are five images that come to mind after poring over the material available on this very unique Canadian, getting lost in his latest book, Polar Obsession, and chatting with him via phone from Nanoose Bay, British Columbia, as he gazed at sea lions and harbour seals and I got a glimpse into his extraordinary existence.

A young boy lies in the foreground, face up and surrounded by blue-tinted snow. A bank curls over top of him, casting him in a darker light than the background, which glistens and glows with the snow that races across the horizon, blending sky and land. The boy is bundled in thick winter clothes: reddish-brown woolen hat and scarf, one-piece blue snowsuit, black lace-up boots. His white cheeks—what’s visible of them through the scratchy wool—have turned mostly red from the cold. His eyelashes are nests of frost. But he shows no resistance to the snow gathering over him. Tufts of his breath blend with the snowdrifts that dance through the air. A half-smile peers through the folds of his scarf. He isn’t hurt. He’s exhilarated. He’s thrilled. He’s at home. He grew up in this land of Inuit people, who understand and revere the rhythms of nature. The rushing wind, surely whistling, at times even screaming, is an enchanting melody to his ears. For him, the winter storm doesn’t foretell death; it’s a sign of life in the North, of continuity and nature and all its awesome powers. There’s nowhere else this boy could be but right here in the heart of it.

CAPTION: “I really believe you’re not fully, truly living until you’re on the edge of dying. I love to find that barrier, where I’m doing something so risky or challenging that (my life is on the line). Jumping in the water with a leopard seal—that could have gone the other way. But I knew that I’d had the greatest experience of my life. On my deathbed, I will remember that leopard seal encounter.” 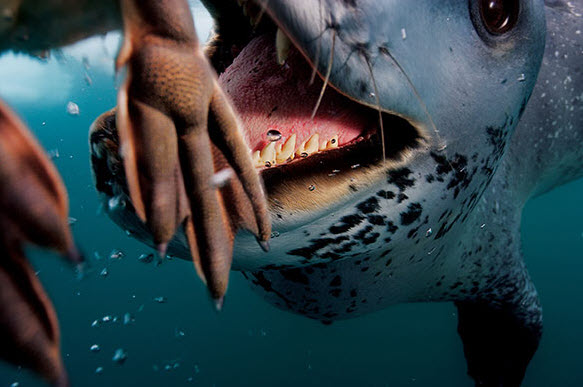 2. ‘Evolution of a Photographer, Part I (Developmental Years)’

In a makeshift darkroom, a set of young fingers pokes into the frame, clutching a photo in the foreground. The image is of a baby seal lying on a snowy bank, gazing up at the camera with a look of curiosity. It’s freshly developed; fluid still drips from the paper. Behind the photo of the seal, a row of black and white images hangs to dry. Glimpses of frozen tundra and seascape fall in line, growing smaller and smaller as they near the background. One photo shows seagulls flying over snow-covered hills that stand like billowing mounds of vanilla ice cream, frozen treats to numb your toes and warm your heart. In the far corner of the room stands a woman, her back to the camera. Her hair spills over her shoulder, which is cloaked in a dark sweater. She’s turned away to focus on something in front of her, probably another photograph. Though they’re in the same small storage room, both the woman and her young companion are lost in worlds of their own imagining. The young fingers in the foreground are whitest at the tips, pressed hard against the photo; the child grasps it tightly, as if entranced by the seal’s expression. It’s easy to imagine this child falling asleep to thoughts of Jacques Cousteau and his expeditions to the most isolated regions of the planet, utterly gripped by the images he’s already seen and compelled to capture even greater ones.

CAPTION: “My mom was a photographer… I watched her take pictures up in the Arctic and I thought she was amazing. She had her own dark room in the storage shed, where she could develop her own prints, and I was just blown away by it… I taught myself how to photograph. I’d look at magazines like Outdoor Photographer and set that as my benchmark.” 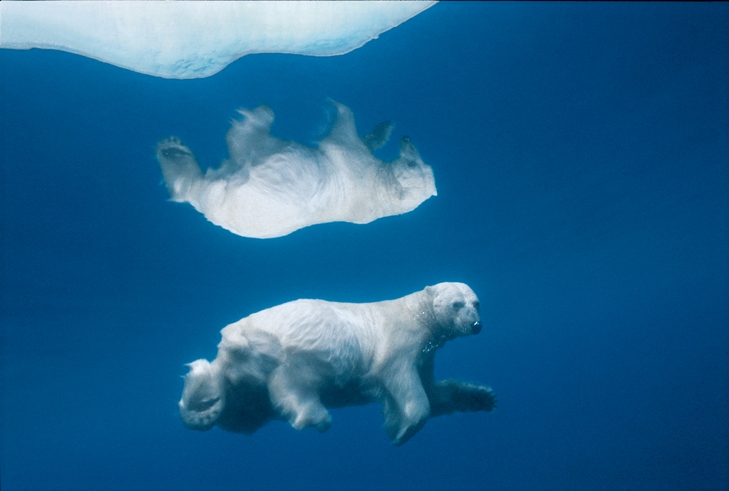 In a postcard-perfect moment, a male scuba diver—legs splayed as he kicks, flippers extended—clasps his camera, staring intently as his subject, which is just out of frame. Bubbles travel from his mouthpiece back to the surface, but he clearly has no thought for the world above sea. He’s surrounded by blue waters, and by coral, rockfish, sponge, anemone, scallops and sea urchins of all colours. And that stray octopus tentacle in the right corner of the frame, pulling his gaze from all else around him. Even from behind his mask, the spark in his eyes shines through; a childlike glimmer as he and his camera take in the rest of the creature’s undulating body. There’s no chance that the diver’s thoughts rest even for a minute on the everyday trials of life on dry land—of biology exams and papers waiting to be written. Nothing could be further from his mind.

CAPTION: “I took up diving, and I started to see all these amazing creatures and look at these ecosystems underwater. That’s where I fell in love with the sea. I’d always loved the sea ice in the Arctic as a kid, but I’d never been immersed underwater everyday for three years like that… I graduated with a marine biology degree from the University of Victoria, but my true classroom was within the ocean.”

4. ‘Evolution of a Photographer, Part III (Ready for Print)’ 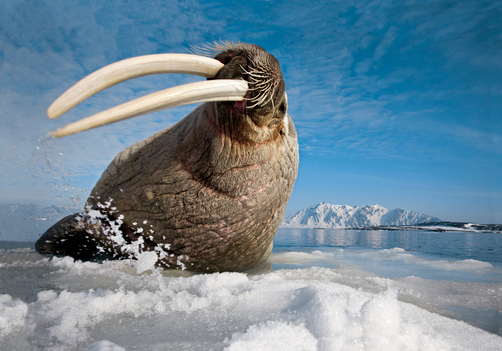 “(National Geographic photographer) Flip Nicklin taught me about the power of storytelling with the camera; about the art of journalism and that it’s not just about taking pretty pictures. That’s what sparked a huge fire in me. Storytelling and working for National Geographic is very, very hard. I met with a lot of rejection. But once they understood my style, things went a lot better. After 10 years of knocking at their door… I’m the only Canadian photographer who regularly contributes to National Geographic.” Photo: Paul Nicklen

A roughly chiseled crevasse appears in the centre of the ice wall that frames the image. Through the gap, a lone polar bear far off in the distance perches on a fragment of ice barely big enough to support him. From the ripples in the water, it appears that the ice, along with the bear, is drifting even further away. A drop of water clings precariously to the top of the break in the ice wall, milliseconds from falling to the bottom.

CAPTION: “My biggest fear right now is that, in 10 years, we’re going to look back at this decade, this time period, and say, ‘That was the time to act.’ I think we are really at our turning point. We just can’t seem to see the big picture, and it is terrifying. I’m not willing to give up yet; I’m going to keep fighting. I believe the power of photography is the one thing that’s going to sway people.” 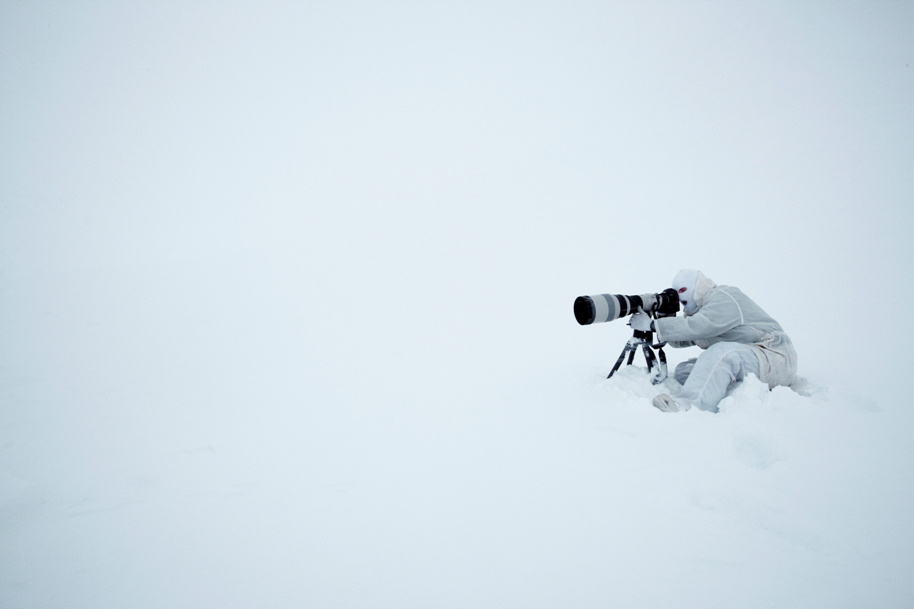 Paul at work during an Arctic blizzard

Paul is intent on doing everything he can to change that last picture. He’ll literally go to the ends of the Earth, if that’s what it takes. Part of his solution includes forming an NGO called SeaChange (Sea stands for “storytelling for environmental action”), which he describes as a multimedia SWAT team for the oceans. He plans to continue his work as a photojournalist, but feels the pressing need to increase his efforts to make people aware of what’s really happening to our environment and what’s at stake if we continue along the same path.

The idea behind SeaChange is to assemble a team of the world’s greatest marine photographers, writers, videographers and web designers that will be prepared to provide near-instant coverage of environmental crises. “Whenever there’s a disaster, this mini SWAT team arrives and attacks it with photography,” says Paul. He imagines partnering with other NGOs, such as the World Wildlife Federation (WWF), WildAid, Conservation International and the Nature Conservancy of Canada (NCC), and providing them with free images, footage and content so that they can spread the word as quickly and effectively as possible. For example, “if there’s a Gulf oil spill, within five days we can hit the entire world with powerful images, multimedia science and data about what’s really happening.”

Paul feels this is a necessary step because we as a species aren’t responding quickly enough to the environmental crisis we’re currently facing. “I love journalism, I love telling a story,” he says. “However, I just feel we’re so out of time right now that we can’t just be doing unbiased journalistic pieces anymore… We also need to hit people over the head with global issues that we have right now—environmental issues.”

So far, he already has some big names attached to SeaChange. International League of Conservation Photographers (ILCP) founder and President Cristina Mittermeier is on board, as is world-renowned environmental photographer Joel Sartore. In October of this year, Paul will deliver another TED talk, this time in Chicago, where he’ll launch SeaChange and attempt to acquire funders. “We need money in the bank so that we’ll be able to react quickly,” he says. “You can’t be writing proposals (for funding) when a disaster hits; you need to be in action.”

It’s an overused expression, but in this case it’s apropos: Paul has truly devoted his life to putting a face to the North—and what we stand to lose if Polar ice keeps melting. His job regularly puts him in grave physical danger and requires that he be away from home more than nine months of the year.

He couldn’t imagine living any other way; he’s driven to get his message across before entire ecosystems are lost forever. “If we lose sharks, for example, we lose entire coral reef ecosystems,” he says. “If we lose ice, we lose polar bears. If we lose the rain forest, we lose Spirit Bears.” Still, his convictions have come at a high cost. Because of the unusual and rigorous demands of his career, he’s had to set aside the dream of having children of his own.

“I was dying to have kids,” he says. “I would love to come home every day and pack up the camper and go off with the kids to a lake and play with them. But then I feel like I’d just be another person on the planet, taking and not giving back. So I’m going to make this sacrifice and not have kids and just put all my time and energy into journalism and SeaChange.

“I think my kids are going to have to be this work that I do. My kid is going to become this planet.”

Paul may have forfeited the opportunity to create life, in the strictest sense. But through his dedication, talent and vision, he’s allowing for the possibility of continued life for every creature on Earth. He’s doing his utmost to make the planet stronger and healthier—caring for our world just as every father is meant to care for his child.

Thank you very much to Kickass Canadian Norm Hann for recommending Paul.